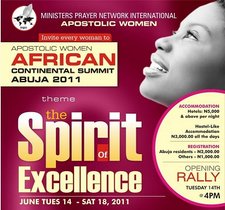 The Spirit of Excellence

Who are the Apostolic Women?

• The Apostolic women are sent ones on assignment to their generation, pioneers,

pacesetters, trailblazers, pathfinders, forerunners, initiators, builders and establishes. They not only initiate new things but have the ability to launch the church into it and carry her into her destiny.

Like Lydia the enterprising and influential woman of Acts 16

Like Mary (the first human being to partner with God to incubate the saviour of the World,Matt 1:16)

• They penetrate into areas that other people will have difficulty getting into. They

invade new territories, open the gates of nations, and turn the world rightside up.

did. They live out their names – The Apostolic Women.

in their environment. They are strong prayer mobilizers- like Mary the mother of

so (Acts 12). They are solution carriers, problem solvers.

God, competent to train even the greatest among men like Pricilla, the wife of

Aquila (Acts 18) did. They are knowledgeable and excel in every facet of life.

restructure a disfigured and disabled church setting and to restore her glory, to

strengthen her structurally and to reinforce her for strength and resilence.

•They are great facilitators, resource providers, and catalysts. They facilitated the

work of the early apostles by generously giving to support kingdom projects,like

•They are women of power, women of divine fire, who terrify the kingdom of

darkness with God’s power that works mightily in them. They are a formidable

force that cannot be stopped.

In addition to pursuing the general objectives of MPN, the Apostolic Women shall have the following specific objectives.

early apostolic women who were broken, bold, courageous and demonstrated the

power of God wherever they were.

upon kingdom women and to be prayerfully released to fulfil it.

about transformation, to change the course of the world.

seed of destiny within them to crush the head of the devil forever.

• To partner with the men to usher in the great harvest into the church.

• To stand in full apostolic authority and take their place in the home, market place,

government, schools, church and businesses assigned to them by God.

• To confront the powers of the enemy at work in the homes, church, society, to

deal with the wickedness in the nations and to shake the unshakeables.

• To stand against evil, compromise and hypocrisy in the church.